The power plant remains staffed with certified personnel to ensure assets are maintained to be operated as directed by administration, provide service to the public during inclement weather outages and other loss of service situations, and monitor transmission of incoming and outgoing service.

The city's venture into the municipal electricity began in 1904 when the city council purchased a small steam-driven electric light plant from Captain J.A. Marshall. Located at the east end of Prairie Street, it was moved south to the location of the water plant. During the first thirty years of operation the city plant more than paid its own way and repaid the original cost.

Girard was one of the few cities west of the Mississippi River to have electricity. Over the years there has been many upgrades and improvements to the plant to meet the electric demand of the city. In 1991, the most recent major improvement included installation of two large engines and all new switch gear.

Now the plant is capable of producing 10 megawatts of power, enough to cover the needs of the city of Girard. Since then, other improvements have been made such as digital metering, computer controlled and monitored circuits, and black start capability. When outages occur during off-duty hours, on-call staff report to restore service as quickly as possible. 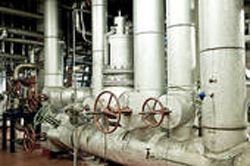